Why water and oil don’t mix

Water and oil don’t mix, because in the mixtures world: like attracts like. And oil and water don’t have much in common. 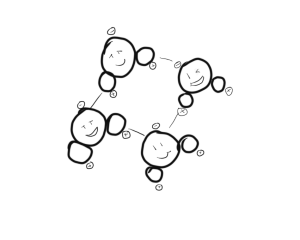 Oil is hydrophobic– meaning it doesn’t like water (hydro: water. phobic: fear). It’s really bulky and doesn’t have any positive or negative charge that water can be attracted to.

The only way for water and oil to mix is to include an intermediary, that person at parties that has a foot in both worlds and can include everyone in the conversation. This person is called an emulsifier.

It is possible to make water and oil mix by adding energy. This could be by shaking a bottle of oil and vinegar or using boiling water to wash away oil. This won’t last long once you’ve stopped shaking though, eventually the layers will separate again. 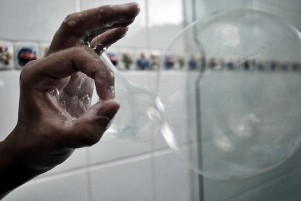 Soap surrounds oil and lets water wash it away maskedcard/flickr

Common emulsifiers include the lecithin in egg yolk and the chemicals in the hull of a mustard seed. Mayonnaise is held together by both these emulsifiers.

On an ingredient list of packaged food you might see Soya Lecithin which is included to keep the food from splitting into gross layers of water and oil.

Another emulsifier is soap. Now you definitely don’t want to put that in your food, but soap helps you wash oil off your hands and pots when plain old water won’t do the trick. It surrounds the oil and lets the water wash it away. Handy stuff right?